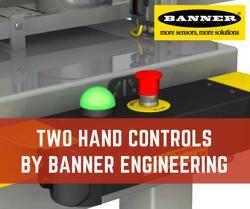 Two hand controls are safeguarding devices that are used to keep the operator’s hands away from the point of operation. The modules deactivate as soon as the operator removes one or both hands from the mechanism, thus protecting the worker from injuries. This makes them an important piece of safety equipment on a plant floor.

Banner Engineering has a comprehensive offering of two hand safety modules and buttons, meeting the highest of standards while ensuring top-tier sturdiness and reliability. 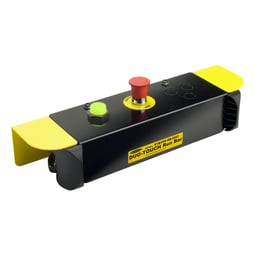 This run bar is an easy-to-implement solution for two-hand control actuation and provides high-level safeguarding, when coupled with DUO-TOUCH SG modules. The overall design is highly ergonomic and minimizes wrist and arm stress. The control bar features two diverse-redundant, microcontroller-based photoelectric STB buttons. Models with an emergency stop button are also available as well. The two-hand control is immune to ambient light, RFI and EMI interference, while the bright LED power ensures visibility in all conditions. 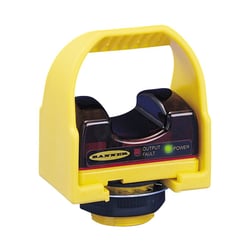 Independent certification tests have revealed that the STB Series Safety Touch Buttons can provide highest levels of safety for two-hand input devices. The design is highly ergonomic, preventing repetitive strain injuries, and the device itself responds to touch rather than pressure. The buttons are unaffected by ambient light, RFI or EMI interference, and certain models can also withstand exposure to certain chemicals. 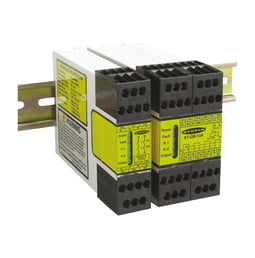 The SG Series Safety Modules work in conjunction with Banner’s STB touch buttons or can be used with existing mechanical palm buttons for an ergonomic, easy-to-use control system. The modules meet ISO 13849-1 and EN 574 standards, while featuring anti-tiedown logic, halting operations if one touch button isn’t operated within one-half second of the other. Both AC and DC current models are available, with two to four Normally Open outputs. The terminal blocks are removable to provide ease of access during installation, and eliminating the need for rewiring every time a design change is approved.