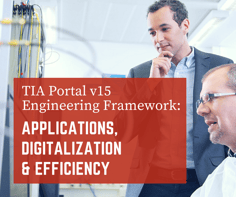 Siemens has displayed a great deal of attention towards the prospects of digitalization, and the positive impact it would have on the industrial sector, from shortened engineering times to greater throughput. Siemens Totally Integrated Automation (TIA) Portal was introduced in 2010 to empower users to perform automation tasks quickly and with ease of use. The software product is designed to deliver a high degree of efficiency for both new & experienced users, introducing standardized concepts for controllers, HMIs and drives. The TIA Portal facilitates the entire spectrum of digitized automation including integrated engineering, digital planning and virtual operation. With the new version of the TIA portal v15, Siemens has solidified its position as an industry leader in the field of digitalization, and expanded its reach to standardization and greater engineering efficiency.

The new version of the TIA portal provides a multifunctional platform for integrating high-level languages applications and additional drive systems, including features such as safety acceptance test, integration of handling function and 2D to 4D kinematics into Simatic S7-1500 controllers. These inclusions in the multifunctional platform within the portfolio now allows high-level languages to be used for creation of applications. Tools such as Eclipse can also be brought in the mix, and development can be made easier.

The integration of the Sinamics S120 and other drive families within v15 has allowed the entire Siemens drive technology lineup to be configured, commissioned and diagnosed within the TIA portal. Another great feature that has added ease of use within the TIA portal is the Wizard-guided safety acceptance test for the Sinamics G drive family. In addition to the new technology CPUs for the S7-1500 Advanced Controller, handling functions with 2D & 4D kinematics can now be streamlined for easy programming, simulation & commissioning. 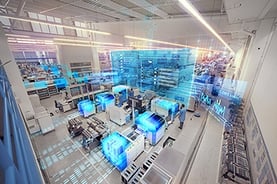 Robotics is yet another dimension TIA portal has added to itself in v15. Robot manufacturers like Yaskawa and Kuka have made available libraries for programming robots within the TIA portal. Following their examples, other manufacturers have also rushed in and are planning to consolidate their libraries as well.

The expansion of the digitization portfolio for the TIA portal heavily focuses on OPC UA functionalities and virtual commissioning. For the Simatic S7-1500 Controller in particular, the OPC UA functionalities have been widened, improving & simplifying the communication between machines & devices on the plant floor. This also means that automation solutions can be implemented according to industry standards such as OMAC PackML.

Virtual commissioning means that the components within a system responsible for control and mechatronics tasks can be validated without actually going through the process in the real-world. At the core of the Siemens’ solution sits S7-PLCSIM Advanced Virtual Controller for Simatic S7-1500, which enables several controllers to be simulated and virtual models to be prepared. As a result, several engineering tasks can be managed in an effective & efficient manner, while automation & mechanical engineering systems can be synchronized before commissioning can begin.

With respect to standardization and higher engineering efficiency, the new version of the TIA Portal builds on teamwork & enhanced diagnostic features for machines & systems. Features within the Portal that allow teams to work more closely & logically include:

The last one in particular brings in alot of manageability as change history & user comments are accessible easily. When it comes to running diagnostics on machines & systems, the Simatic ProDiag package comes into the picture. It allows monitoring of fail-safe modules and criteria analysis for ProDiag alarms. When combined with the S7 Graph Control display, the package is able to drastically improve diagnostics & visualization of the machine sequences directly on the operator’s device or system.