The Essentials of Magswitch Automation Magnets 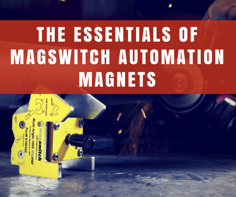 Electromagnets are highly popular and relied-upon in the entire fabrication industry. But in recent years, a new technology has made headway, one that revolutionizes the entire concept. Magswitch Technology aims to offer a switchable mechanism to welders, eliminating the need for electricity while providing magnetic fields stronger than electromagnets of the same size. Magswitch automation magnets aren’t permanent magnets either; instead it holds the capability to turn on/off with the switch of a button. This gives it a significant advantage over permanent magnets, specifically the ability to power it off to allow debris to fall from the magnet. 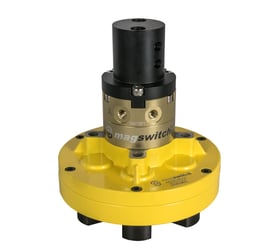 Magswitch has fitted its patented technology within several products, making it available at a multitude of angles. This makes physical activities such as lifting and welding using the magnet easier. The magnets are also available in a variety of sizes and strengths, making them perfect for all work-pieces.

As an example of its capabilities, an individual Magswitch can hold almost 250 times its weight, with one typical piece being less than 200 grams. The technology also comes in handy during stacking of metal sheets, as it offers superior reachability through its cordless design.

If the need arises, Magswitch magnets can also be used to perform automated tasks, as they can be controlled through electrical motors, solenoids, or actuators.

Magswitch’s switching technology’s introduction has not only provided an alternative to how things were previously done but also opened new areas where it may be applied. For instance, when being used with thinner metals, the shallow depth of field allows lifting to be carried out in a much safer manner.

At the heart of Magswitch’s design are two magnetic discs, coupled together by opposite polarities, and placed within ferromagnetic housing. The magnetic field is switched on/off by rotating the disc 180 degrees.

Traditional magnetic technologies carry around with them the term “deep field”, which makes reference to the magnetic flux that flows in a circular pattern, from the north to the south. But the limitations arise when these magnets are used on thinner sheets as too much of the magnetic flux simply goes through.

In retrospect, Magswitch technology uses the magnetic field in a different manner, and instead of following the circular pattern, concentrates it close to the tool. This is known as “shallow field,” and gives the magnet exceptional power over thick or thin sheets.

Overall, Magswitch’s technology is making its way in all sorts of operations, including manufacturing, fabrication, shipbuilding, and recently automation as well. The level of precision and control offered by Magswitch has garnered it significant attention from OEMs looking for end-of-arm tooling materials, indicating the potential for Magswitch to become an integral part of the automation ecosystem in the coming years.