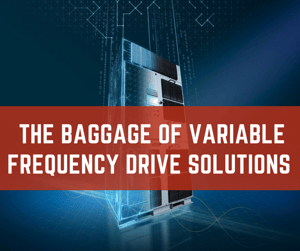 Over the years, drive technology has truly advanced and gotten more diversified, giving users a wide variety to choose from. Low voltage VFDs have made their way to applications of up to 2500 HP, and greater, while medium voltage VFDs are being used for applications as low as 150 HP. A 2016 industrial survey revealed that customers were considering making the shift from LV to MV VFD solutions.

While the idea does sound enticing, it should always be known that no two solutions are the same. Therefore, carrying out a cost-benefit analysis is always the best strategy. Companies quite often consider the initial investment as the primary factor when choosing a VFD solution, however nothing could be further from the truth. A few systematic considerations that can help companies determine the true cost of their investment over the years are:

But this is not the end of it. There are a number of factors that play a key role in determining the final cost of the VFD solution being installed. Each of these additional factors are broken down separately to give you greater clarity in understanding its implications.

Depending on the size and the conditions, the size of a LV VFD solution can be as little as 50% and as high  as 105%, compared to a HV solution. The initial purchase price may be significantly lesser for the LV solution, but when costs such as cabling, components and installation are added, the economic advantage are driven down.

Typically, LV drives have been seen as a cost-effective alternative to MV drives when medium voltage motors are to controlled at lower power ratings. In the industry, the solution is referred to as High-Low-High, and this arrangement may be used in two instances:

Low voltage drives require an input transformer to step down voltage to 460-600 Volts, and if the motor is of medium voltage then voltage would have to be stepped up from 460-600Volts to the motor’s rating. 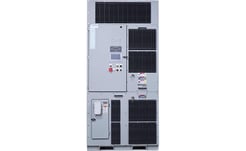 Advancements in power electronics technology has allowed medium voltage drives’ sizes to be shrunk down, such as Siemens’ Sinamics GH180, which can save as much as six times of space compared to a high-low-high solution.

Medium voltage and low voltage solutions are normally considered during expansion projects for loads that have lower power requirements. When carrying out a cost-benefit analysis on such requirements, it is vital that the available input voltage, line parameters of the existing distribution system and its distance to the load location be considered.

MV drives have a major ace up their sleeves in the sense that they possess lower current flow for a given power output. In contrast, LV drives draw almost 9 times the current when using the same power. This translates into the VFDs requiring thicker cables per phase resulting in added purchase, installation and maintenance costs.

As a rule of thumb, it must be remembered that the higher the current, the thicker the cable and the greater the cost. As the motor’s current requirement increases the cost difference due to cables between the 480 and the 4160 volts VFDs grows at a disproportionate rate. For instance, the cost for a 250HP LV drive is 10 times the cost of the MV cable at a length of 100 feet. Costs become 12 times higher for 500HP drives, and inflate to 24 times for 750HP ones. It is therefore clear that the distance between the power source and the load plays a huge role in cost fluctuations.

There’s another factor to all this. As the distance increases, the quality of power being transmitted also becomes a concerning factor. Low voltage VFDs have two level output voltage wave forms, containing 5th and 7th order respectively, which ultimately are damaging to the motor’s windings. On top of this, the long feeding cable can generate impedance mismatch that creates voltage spikes within the system, damaging the insulation and shortening the lifespan of the motor. These factors are discussed up next.

The financial impact of downgraded power quality is often classified as maintenance costs, while they are actually impacting the equipment at a continuous rate. It has been determined by a study in the US that the economic cost of power outages across US business sector is somewhere in between $120 - $190 billion per year. For Europe, the cost is about $167 billion a year.

So, it’s quite obvious where the problem lies. Simply stated, power quality is the grid’s ability to provide a stable supply of power. It is important that the power be free of noise, frequency fluctuations and transients, as these incidents directly impact the quality of power.

Of all of these factors, the most repetitive ones are sags (38%), swells (10%), and harmonics (22%), with the primary reason behind them being the age of the existing grid system, typically around 30 – 50 years in US. These factors as a whole take away $3 - $8 per kW for textile industries, and $15 - $20 per kW for industries such as chemicals, metals, etc. These costs constitute of:

All these factors should be taken into account while selecting a VFD, as it must possess adequate tolerance against disruptions in power quality to maintain their economic advantage.

The second largest cause of power quality issues is input harmonic distortion. The use of non-linear loads that include almost all digital equipment and AC/DC VFDs is the primary cause of these distortions. A study in the US revealed that harmonic distortions were on the rise with about 60% of all circuits showing an increase. The economic impact of these distortions were found to be about 5% of all power quality costs in the EU, or $8.4 billion annually.

Compared to voltage sags, harmonic distortions don’t cause process interruption, but lead to slowing down the process by increasing the error rate and tripping frequency. The effects of excessive input harmonics can be jotted down as:

When a 6-pulse LV drive is brought into the equation, it must be known that high input harmonics are generated if filters are not applied. Input line reactors of about 3% - 5% impedance, can be installed between the drive and power supply to mitigate this issue.

The following table shows how the Total Harmonic Distortion varies as the VFDs’ specs change, and how the mitigation technique impacts this percentage:

In retrospect, medium voltage drives already contain a minimum of 12-pulse diode rectifier due to the increased DC voltage requirement, automatically bringing down the THD. A prime example is that of the Sinamics Perfect Harmony GH180 whose 9-cell, 18-pulse configuration makes sure that the load gets less than 5% & 3%, current and voltage distortions respectively.