Reducing Electricity Cost through Use of Premium Efficiency Motors 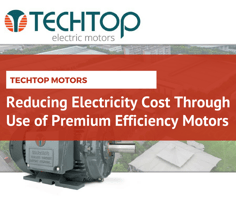 Over the years, electricity has become a basic necessity, without which life as we know would simply become dysfunctional. In such conditions, the need for energy efficiency has become a top requirement across the industrial spectrum. When rising energy costs are coupled with uncertainty of available electricity, the result is increased relevance for the part of the business responsible for boosting efficiencies.

Surely, there are other perks of going down an energy-efficient path as well, which include turning over higher profits, and beating the competition, while bringing negligible change to the operating procedures. One way of ensuring an energy-efficient industrial environment is by switching towards premium, energy-efficient motors. In some instances, these motors are all that are required to recoup lost savings, that alone make up for the cost of these motors.

This practice of business is not only a wise strategic plan but also a legal requirement. The Energy Policy Act of 1992 established minimum efficiency standards for all motors that entered the market after October 1997. Nonetheless, only 10 percent of the motors in use comply with these minimum levels. To make up for these shortfalls, newer laws have implemented even more stringent standards of energy efficiency.

The electrical cost of a facility is determined by a number of parameters, but there are three that are most critical when it comes to reducing energy costs:

The advantages of premium efficiency motors can never be fully realized without looking beyond the purchase price of these motors. Sure, premium motors cost 15 – 30% greater than standard efficiency motors of identical output but in the long-term, the former take the lead. It must be noted that a motor’s initial purchase price accounts for less than 2 percent of the total lifetime cost. The bulk of the motor’s lifetime cost comes from its electricity use, i.e. up to 97%.

This means that if a motor has a purchase price of $1600, it’s total energy costs would be over $80,000. The difference in the initial purchase price quickly becomes irrelevant when the energy savings are considered. The energy savings quickly eclipse the difference in acquisition costs, which translates to recouping of the purchase price in just a few months. The savings continue even after the motors have paid for themselves, and till the end of its life amounts for several folds of the price tag.

There are major design differences between the two motor types. Premium efficiency motors have larger-diameter copper windings, laminations of higher steel grades and specially designed precision air gaps something that standard motors lack. As a result of these design modifications, premium motors tend to run much cooler than standard motors, requiring less amount of lubricants and insulators.

This reduced operating temperature also results in lesser amount of waste heat into the surrounding air, leading to reduced ventilation requirements for the motor, yielding in additional energy savings. Premium motors also operate with less slip than conventional motors, that leads to greater output of the shaft rotation speed. Finally, given the tighter tolerances in their design & manufacturing, Premium Motors tend to last longer than their conventional counterparts, reducing the maintenance & replacement costs as well.

The stories of energy efficiency associated with NEMA Premium Motors aren’t mere stories, they are practicalities which have been evident in several real-world situations.

Therefore, the time is right, not only for those in need of energy-efficient machinery, but also for the manufactures, to seize the moment and start production of NEMA premium motors. The competition is already quite stiff, with several companies providing added benefits on top of meeting NEMA Premium Requirements. One such company is Techtop Motors that has pioneered in the field of designing & manufacturing premium quality motors.

The benefits associated with Techtop Premium Motors include: