We are heavily dependent on artificial lighting in almost all walks of life, whether its within our homes, at work or somewhere else. Different types of lighting mechanisms are used to illuminate a particular environment; however, LED lights have left a strong mark on the market. LED-based floodlights are becoming increasingly powerful for their bright and maintainable operation. But more or less, the ease of use has remained the same.

Flood-It LED floodlights have built on the benefits of LED and added ease-of-use, essentially modernizing the entire concept. Whether you’re working at a non-illuminated area of the house or a construction site, getting access to power can be daunting. Flood-It LED floodlights solves the entire spectrum of problems faced due to conventional lighting systems in a single sweep.

They can be categorized as: 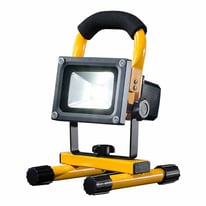 Flood-It floodlights’ LEDs have a lifespan of 50,000 hours! The LED is designed for heavy-duty operations, and is supported by a machined heat-sink on the reverse to provide easy heat outlet.

In the heart of a Flood-It floodlight sits the driver that regulates the current input to the LED chip. This driver makes sure that the light is getting the right amount of amperage at all times, ensuring a smooth & stable output.

As stated earlier, the lights are designed for industrial environments. This means every single component is durable to its very core and will keep you afloat in the harshest of conditions.

Almost every LED floodlight manufacturer offers the above mentioned three features, in one form or another, but battery is something the others greatly lag behind. Flood-It doesn’t compromise on quality and uses Grade A Li-Ion batteries. These batteries aren’t at risk of failing prematurely, unlike cheaply-made lights, and can cope with frequent charge cycles.

Flood-It’s synergetic use of its features truly sets it apart from the competition. The batteries truly put the floodlights at the next level, and eliminate the annoyance and extra requirements that come into play with wired floodlights. Not only are the batteries top-grade, the driver chip used to operate the LEDs makes use of these batteries in the most effective manner possible. Most LEDs get dimmer as the batteries drain, however Flood-It’s LEDs maintain a constant luminosity, even if you’re at the last watt. 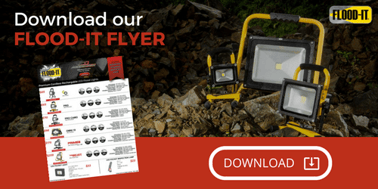 Interested in learning more about the benefits of Flood-It's industry leading battery life?