3 Tough Level Sensing Applications & How to Solve Them 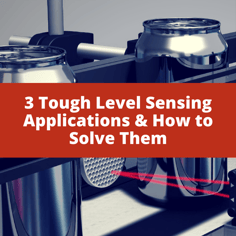 The manufacturing process of many industries would come to a standstill without level sensors. From food to beverages to pharmaceuticals, measurements that were previously performed using large, mechanical devices can now be performed with advanced, slim and durable sensors. The spectrum of solutions available today has made it possible to use more than one technology to solve a sensing problem. However, there are some rugged applications where one technology stands out in particular. Historically, challenging substances for level sensing applications include foamy liquids, viscous fluids and granular solids. These three sensing applications are the hardest to tackle, yet vital to ensure throughputs are met in an efficient manner.

Accurate measurement of level of liquids that produce foam is an especially difficult thing to do. For instance, ultrasonic technology fails to get past the foam resulting in errors & incorrect readings. In such applications, the risk of tank overflow is particularly high, causing problems such as:

Therefore, the amount of overflow necessary to eliminate foam must be accurately determined, but not so much as to cause wastage of product.

Guided Wave Radar Technology is the answer. This is a top-down, direct measurement technology that measures the distance to the product’s surface based on the time domain reflectometry principle. A microwave signal is sent down a probe and the amount of time taken for the signal to reflect back from the target is measured.

However, latest advancements in guided wave technology has overcome these problems in foamy applications. Sensor intelligence has been enhanced through special algorithms to adjust for the dielectric constants as well as the medium change.

Viscous fluids such as industrial adhesives, honey and sewage make up for an uphill task to any level sensing technology where the device is in contact with the fluid. The use of a pressure measurement device in a heated process is prone to an on-scale failure as the product can cool down & solidify. Such an interference can lead to unintended overflow that ultimately causes loss of product.

Same is the case with industrial adhesives and sewage that builds up as it passes through the tuning fork. If the accumulation continues, the sensor can become inaccurate and fail to perform the task for which it was intended.

Ultrasonic devices can solve this problem. By releasing short bursts of energy, they have the ability to gauge levels by measuring their duration & intensity. As ultrasonic level sensors are non-contact, they are not at risk of malfunction due to accumulation of residue, making them ideal for applications that involve caustic & acidic mediums.

Nonetheless, it is important to consider whether the sightline between the device and liquid would be obstructed by mesh, chains, grates or other instruments. If so, then the ultrasonic sensor must have foreground suppression that can filter out such interferences.

You may think of this as one of the easiest tasks in an industrial environment, but the reality is, solid level measurement can become a highly cumbersome problem. Solid levels are hard to detect for many sensing technologies due to several reasons. Firstly, solid products used in industries are dusty, e.g. wood chips, which lead to degraded signal strength of otherwise reliable mediums such as ultrasound. In addition, clear solids pose another challenge, turning everything within the vessel into a lens, scattering the light source and causing fake measurements.

The solution to this application comes in the form of regular and mono-probe tuning forks. Tuning forks are a top choice for solid sensing applications as they are designed on resonant frequency technology. The presence of material is detected by the fork, causing the frequency to change, indicating that the material has reached up to a certain point. It must be noted that tuning forks don’t possess the ability to detect a range of levels, and can only be programmed to detect a single one.

It is for this reason that several tuning forks are lined up in a single tank. For instance, one fork might be used to detect when the level gets too high while another one is used to ensure the level doesn’t get too low. Additional forks can be used to create warning levels as well.

There are two different classes of tuning forks:

Both of these types operate using the same technology, with the difference being that mono-probe produces resonant frequency within a single probe.

There are applications where tuning forks are prone to becoming permanently tripped due to lodging of the solid product. In such a situation, a mono-probe  fork should be the way to go, instead of the cheaper traditional fork solution.